more from dan’s visit
cleared out by ~fragilemidnight on deviantART

i was so so bored so i decided to use the new fabric i bought and make a bag. was going fine, tho threads kept getting caught on the bottom and tangled etc…don’t know why…but then the needle broke, and now it’s jammed and i can’t move any of the parts. same as last time i broke it, and there were no parts of the needle in the bobbin area. grrrrrrrrr. and i was almost done!!!

i should post something more than photos of being silly….so, photos from the week he was here, that he is not in hahahahah using annoying deviantart embed codes 🙂 i just noticed they existed hah
under pressure by ~fragilemidnight on deviantART
north office

so i have a new camera, thanks to circuit city’s financing with no interest until january 2008. and their current offer to include a 2 gig sd card for free. and i gave in and bought the nikon bag combo cuz it came with an extra battery and uv filter and cuz i’d need a new bag anyway, the lands end purse just wasn’t going to cut it anymore. gah so much $. i guess that’s the end of me shooting film. i have a few rolls left i feel obligated to use, but i’ll probably just do some experiments with them, and be done with it.

i think the minolta has finally bit it. even more than it did after i broke it. i thought it was just the batteries being dead on sunday, but put new batteries in it today, it is still stuck at full zoom. the slider makes it look like it’s supposed to be zooming, but it’s not. may be looking at cameras tomorrow. gah.

so the outing today was shot on film. chris and i went to sattler theatre. upon walking in it wasn’t as fabulous as i was hoping. but by the end it had grown on both of us. unfortunately i can’t shoot color film, plus i used one of the expired rolls, so the colors are way messed up. i’m not good enough with photoshop to make it look normal haha. most were switched to black and white, and i have 2 real black and white rolls to pick up tomorrow. it’s a neat little building. i’ll need to go back with a new camera if i get one, for color shots.

so looking for a camera, i still want to go with nikon. it seems silly to spend 900 on the d70 when for 100 more i could get the d80…but i’m still having issues spending that much money. gah. so expensive. and i don’t know whether to get the kit with a lens, when the stock lens was reviewed sorta badly, or not. i know nothing about lenses, and maybe mine is shit right now too and i just don’t know any better. will i really notice a problem with the stock lens? i doubt it. gah so so so much money.

i love that this just says “drum”! 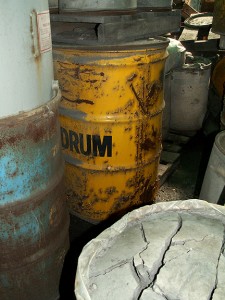 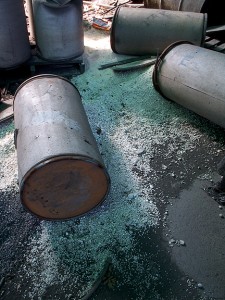