Oh, the Tea Party….another free show in Buffalo, which meant they were going to play the same old set list. To be funny, I posted the previous show’s set list in the event page on FB, tagged a few friends who always bitch about it too, and ended up in an argument with Jeff Burrows LOL. He got all butt hurt for us calling them out, and then they went on to prove me right, and played the same set list – only switching out The Messenger for Release, and the Star Spangled Banner instead of Oh Canada. I’m posting the screenshots for future reminiscing LOL 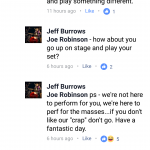 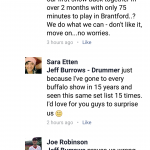 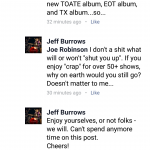 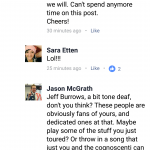 LOL The whole thing makes me laugh, because JB is delusional if he thinks they do actually change their set up. If it’s not a show where they’re playing a full album, it is, as Joe said, the same crap. It’s amazing crap, but, been there done that.

I’m a bit put off by his responses, that you’re really going to speak like that to people who shell out money time after time for you. Aside from the word “crap” which apparently offended him, we weren’t being mean, we were just trying to make a *very valid* point. And then they go to prove us right, though they might claim by changing one song, they gave us something different. (Oh also, Joe sent me a photo of the set list on the stage before the show, and they had written in Oceans at the End, but then did not play it after all.)

So here’s the set:
Writing’s on the Wall
The Bazaar
Lullaby
Psychopomp
Release
Fire in the Head
Heaven Coming Down/With or Without You
Save Me/Bow Solo Star Spangled Banner/Sober
Temptation/Dazed and Confused

It looked like a short set to me, and the main set was indeed only an hour. His argument that they only had 75 minutes to play at the previous show is pointless, as it’s exactly the same time they played in Buffalo. (Or maybe they played 80 minutes, big deal).

The whole thing leaves a bad taste in my mouth, and I can’t even say I enjoyed the show. We spent most of it back at the chairs we brought, as we met up with several people from work. I want to say that I’m not going to see them anymore when they’re just playing a “festival set” as they’ve called it before, but I know I won’t be able to resist if it’s something I can easily attend.

Posted in: Concerts, The Tea Party \ Tagged: the tea party